It’s been a little quiet here on the blog, and I’ll tell you why. Coming back to Switzerland, to Boncourt, after the unreal sunny warm visit to Sardinia was hard. A very cold snap arrived at the same time we did, and we stepped off the plane to cold and foggy gray. Being near the sea had brought us associations with Puget Sound and home, and somehow, it seemed that we should board that plane and get off in Seattle. It was rather shocking when we didn’t.
The return to school for the kids last week was also hard, the mornings that much darker getting up, school and language still a puzzle. And now Zeus is away working long days, and we miss him. I spent a lot of time last week missing the simplicity of homeschooling and agonizing over whether or not this all was a good decision.
Fall is a time for hunkering in, building fires, reading good books, game nights, cooking savory meals – in short, for enjoying all the comforts of Home. But when you are far from one home, and don’t yet feel like the place you are living is home, then you feel a little lost and homesick. And that is what we are all feeling.
Towards the end of the week, the Lord prompted me to take myself by the scruff of the neck and do a little shaking: late October is like this, even when you’re homeschooling, don’t you remember? You need some exercise! Cease overthinking, stop pondering how you feel about everything, count your blessings, and do the next thing.
So I got a little exercise, worked on some house projects I’ve been procrastinating about, and tried not to Ponder Everything. God is my Home, and my loving family is around me. Yes, I am homesick, but wallowing around in it doesn’t help anything much. There was a song we sang at church on Sunday with good words in French that were something about being and growing and rejoicing wherever God has put you.
This week has been better – no school-induced tears, I think (although maybe I shouldn’t say – the day is not over yet), and there were some encouraging academic reports coming in: a German test with only 1/2 of the answers wrong instead of 3/4 wrong!  Progress!
So that’s about where we are.
And here are a few pictures to help tell the rest of the story.

~~~~~
Will Easy Jet pay me for the Advertising?

First of all, because it’s just not something you see everyday: the Alps from the airplane. The rest of Switzerland is buried under a sea of clouds. 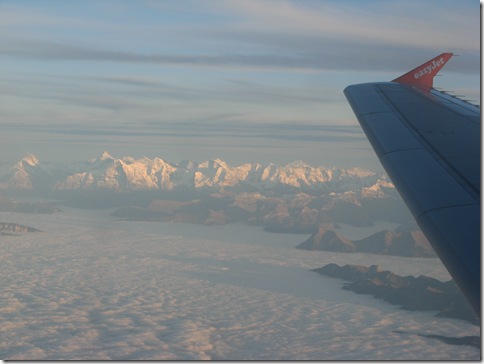 Remember my trip to Basel and my fruitless search for a crock-pot? Well, even before I wrote that, for my birthday a few friends had gone together and got me an Amazon France “Cheques-cadeau” with which to purchase one. Here it is – Mmmm!!!! 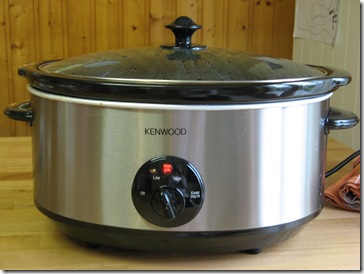 I’m not sure why, but the thought of spending this year without a slow cooker brought me great feelings of anxiety. There is great security arriving home from church, or a soccer game, or just an afternoon of errands knowing there there is hot food waiting and ready to go. The first Sunday I got it fired up with some chicken cacciatore, I immediately felt the desire to invite a bunch of people over for lunch – that’s what a crock pot does for me. I’ve used it at least once a week since. Thank you, friends!
At the moment this photo was taken, it was full of pulled pork, which is a favorite of everyone in the family – 6 out of 6 – amazing! Our small village store had no BBQ sauce, so I had to make some, morphing several recipes that I found online.  It turned out okay – sweet and sour and a little too tomato-y. If you have an easy and good bbq sauce recipe that doesn’t require a bunch of unusual ingredients, I would love to have it!

The week we got back from vacation, we bought Hermes some new fall shoes. They came in a shoe box. And shoes boxes, as you know, are meant to be made into dioramas!  I love dioramas, and I love making them with my kiddos. When Artemis was in kindergarten, we made a lovely one of the solar system with all the planets hanging in space. I used to think of that homeschooling year as a failure, but now I know that if we were making dioramas of outer space, it can’t have been too bad.
This one is “Underwater Sardinia.” One of the stores here – the Migros – has started passing out a pack of fishy stickers for every 10 francs you spend. You are supposed to collect them in a special book, but I didn’t know that. I didn’t even realize they were stickers at first. I just thought, as they lay there next to the empty shoe box, Hey! This could keep Hermes busy for a little while!
And it did! He was very happy as he watercolored the sides of the box blue and the bottom yellow (for sand). The rock is a real Sardinian one which seemed to have fallen into my bag somehow.(!) And the shells are also real ones we brought back that Hermes painstakingly glued into place. Before it dried up a bit, the parsley looked very much like seaweed – that was Athena’s idea – she is so wise. 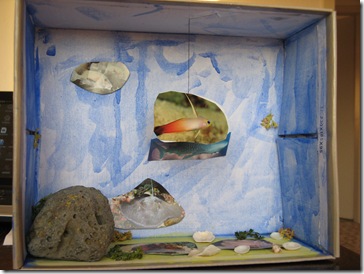 The fishy on the string has a different fishy on the other side, so you see both when it spins in the breeze.
And, yes, just so you know, I do know that the proper word is ‘fish’ and the plural form is ‘fish’ lest you think otherwise. But now that we’re all sure about that I’ll go back to ‘fishy’. 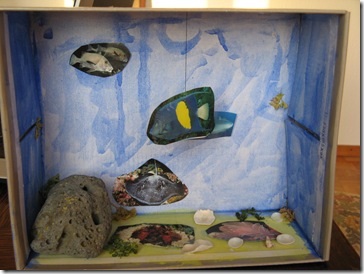 Zeus has spent the month of October working hard at his new job, faithfully commuting back and forth while we played on the beach. Upon our return, in order to facilitate a commute to Basel that is an hour each way instead of two hours each way by train, we bought another car. It is not at all new but had really low mileage. Er…kilometerage? Apparently it really did belong to a little old lady who only drove it to church on Sundays. Or something like that.
It is a Honda Jazz. Which Zeus Mr. Carman tells me is called a Honda Fit in the States. A Honda Fit sounds like a granola bar to me, so I am glad it is called a Jazz. Only when he first told me, I thought it was called a Jazzy. Which made me think of my cousin Christy’s dog Jazzy.
Now Jazzy Dog, who has since passed on to a fluffy couch pillow in the sky, wasn’t exactly what you would call a “friendly” dog. She was a little Yorkshire terrier, and when I met her, she was already advanced in years and pretty set in her ways, perhaps much like the lady whose Honda this was. Anyway, Jazzy Dog didn’t like to be pet by anyone who was not part of her family, and if you tried she would bite you. But her hair was so soft and silky that it was hard not to try anyway. If you were very quiet, snuck up gently on her from behind, and petted her softly she would think you were Christy and you could get away with it for a little while. Until Christy came in the room and Jazzy saw her. Then she’d look startled and whirl around on you. Caught in the act!  Arf arf arf arf arf!!!
A n y w a y….. the point is that when I thought the car was a “Jazzy”, I started calling it the Jazzy Dog. And it kind of stuck.  Zeus is not very pleased that the car is named after a crotchety little ol’ dog, but I can’t help it. When he is around, we try to use the other name we hurriedly drummed up instead: The Silver Bullet. Now that has a speedy ring to it, doesn’t it? But we all know that it’s really The Jazzy Dog Car. 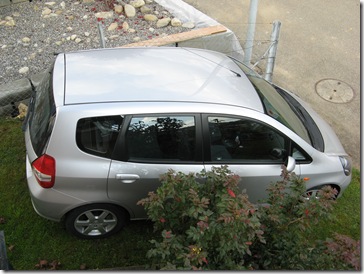 And then there is a morning like this one, and when we’re cold and tired and fussy about the kids having to leave at dawn, and then we open the door and stop in our tracks because of The Beauty. This was the view from the front door, about 7:45 a.m. a few days ago. Not for the first time, I wish I were a painter. 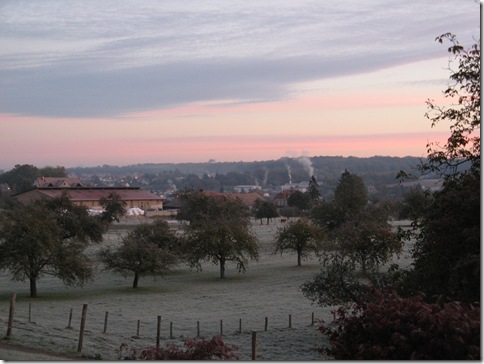 5 thoughts on “Back in our Tracks”