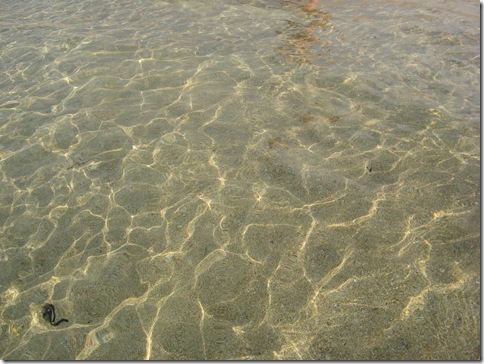 When we went Fishy Peeping the other day, all while I enjoyed watching them grazing seaweed off the rocks, somewhere in the back of my mind was drifting the thought, hey Fishy, you seem very fresh…I bet you would be tasty. I felt kind of bad about that, but when I confessed, Katie told me she often has similar thoughts underwater. We haven’t had fish in a while…Fish sounds nice! So Saturday Paolo went down to the fish market and got some nice fresh mullet. This was especially interesting since this was one of the kinds of fish I had seen seen swimming around and about which I had my tasty thoughts. Paolo baked them on a bed of salt, covered with more salt. It was simple and delicious! 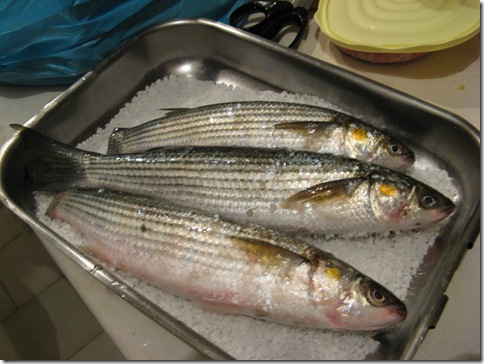 Here they are, our hosts, Katie and Paolo, Diego, and Anita. 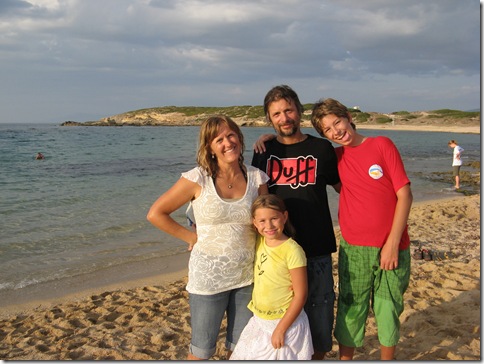 ~~~~~ A Visit to Antonica ~ Antonica is Katie’s neighbor, a genuine older Sardinian lady, complete with braided bun and long black skirt. We ran into her in the street one day, and she invited us for coffee the next day.  She has a typical Sardinian house with the front door right on the street and a courtyard garden in the back. 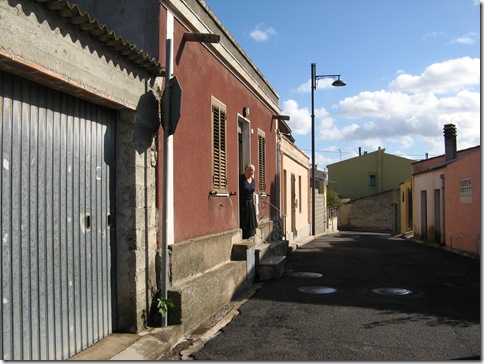 She made us delicious espresso and we chatted, Katie translating for me the gist of their conversation in Italian. She told us how she met her husband of 44 years who passed away last year. His mother had passed away and he lived on his own, but his sister came every day to keep house for him. Every day on his way to his work with the cows he passed her house and said, “Bon Giorno” and “Buona Sera.” Finally he had one of his friends tell her he was interested. Apparently her reaction was positive, because she said he was ready to marry her the next day! His sister was tired of keeping house for him, and he needed a wife!  Signora Antonica said that maybe they weren’t very wise, since they hardly knew each other when the got married, but that she couldn’t complain. He had been a good husband, and they had had 44 good years together. 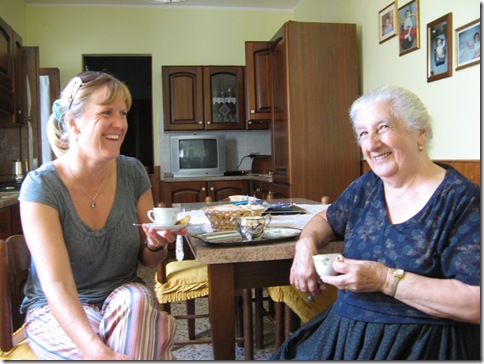 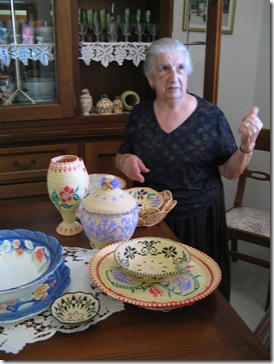 After our coffee, Signora showed us the traditional Sardinian baskets she has woven. They are made from beach reeds and raffia. She is saving some of these for her 7 year old granddaughter who has already asked for them and staked her claim. She was very welcoming and friendly and offered to let me try on her traditional Sardinian costume to take a picture. Unfortunately we didn’t have time that day. 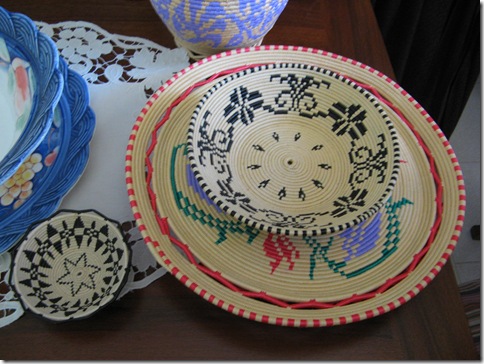 ~~~~~ And now, a few more views of the Sardinia we have been enjoying: twilit road with pampas grass 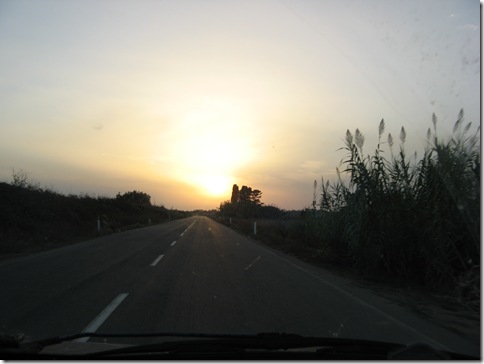 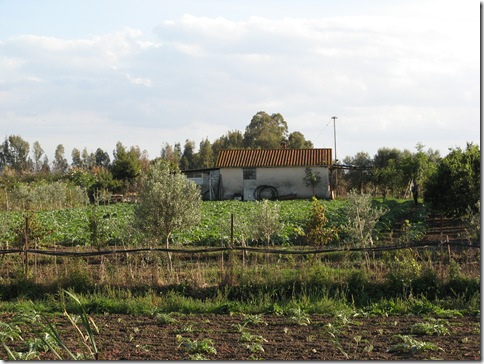 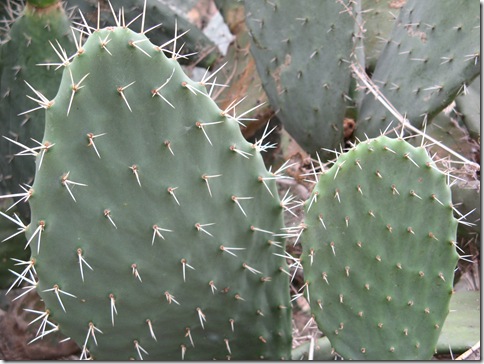 cacti along a village road – people use them for hedges 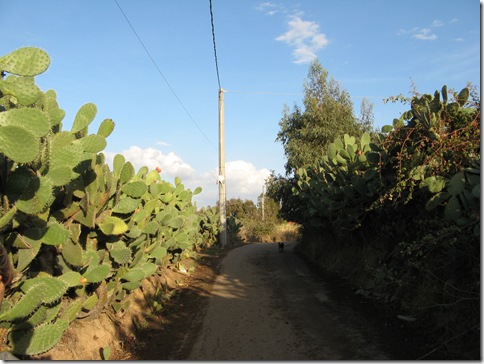 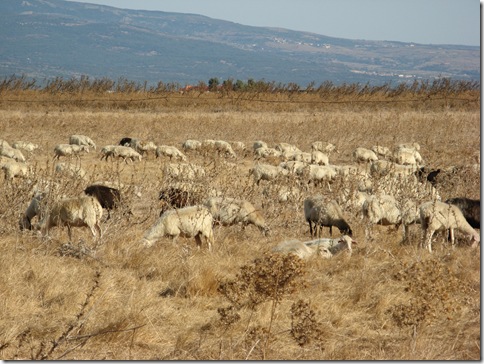 volunteer cactus in the neighbor’s gutter 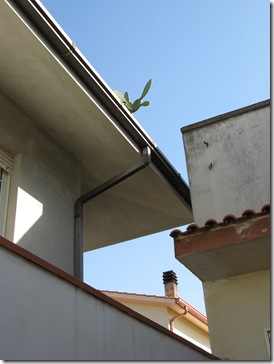 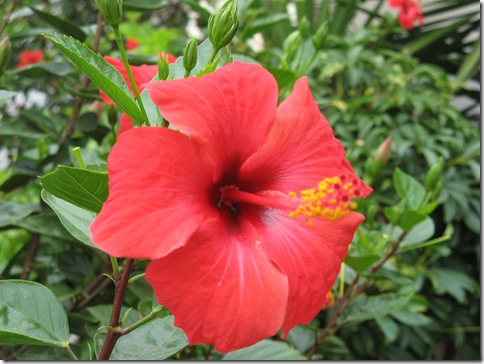 feeding the horses that live across the road 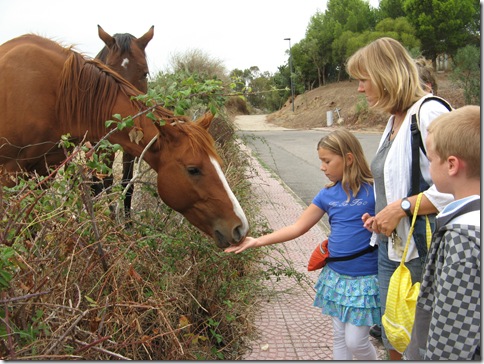 the gang on a windy-day outing 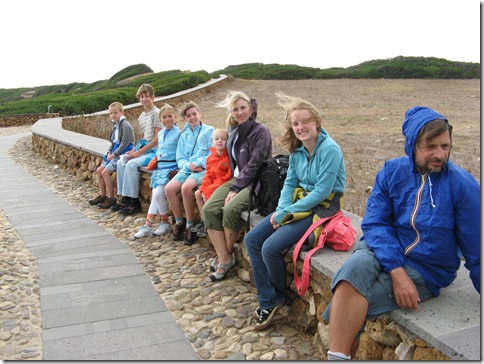 because we are both blond, everywhere we went people assumed Katie and I were sisters. No, but good friends for nearly thirty years! 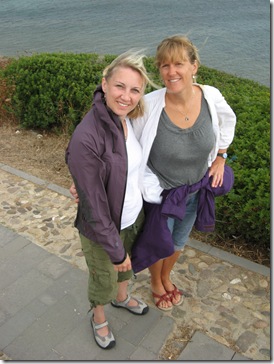 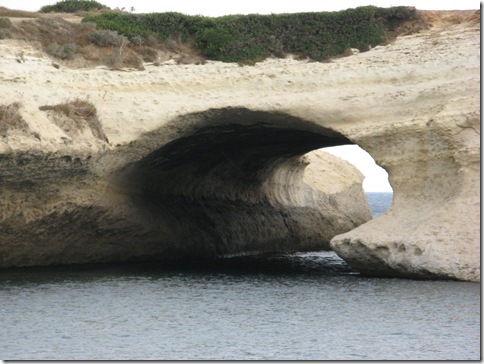 dinner time – why are we all raising our hands? I can no longer recall 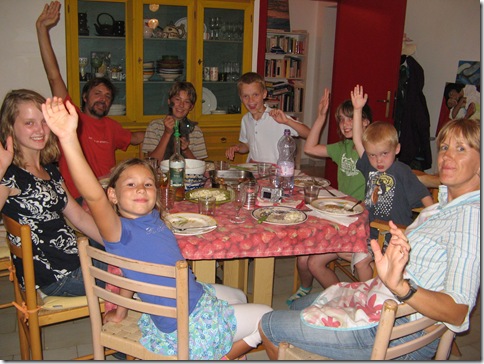 Apollo bored enough to start reading on the Kindle 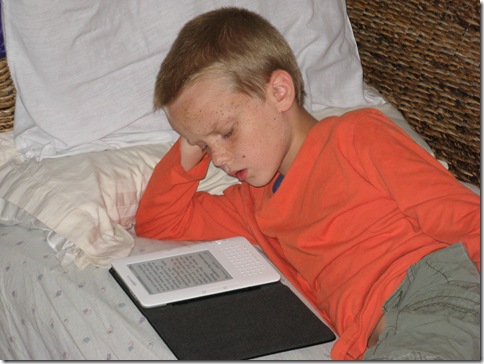 a Signor on his bicycle – unfortunately I was too shy and slow to take the photo from the front – he was quite impressive and robusto! 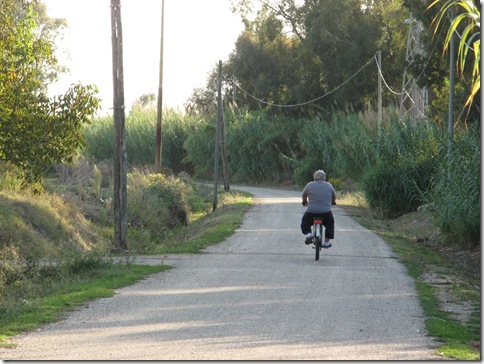 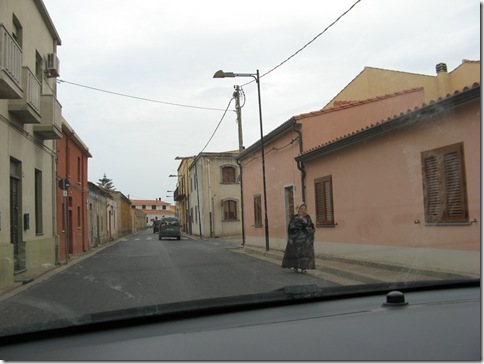 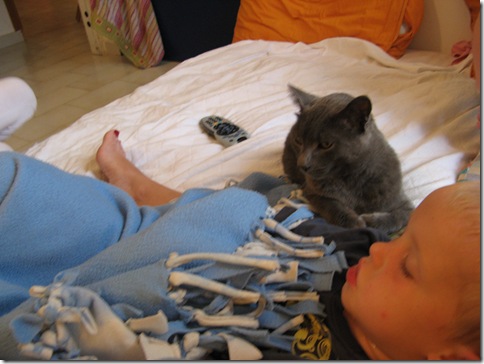 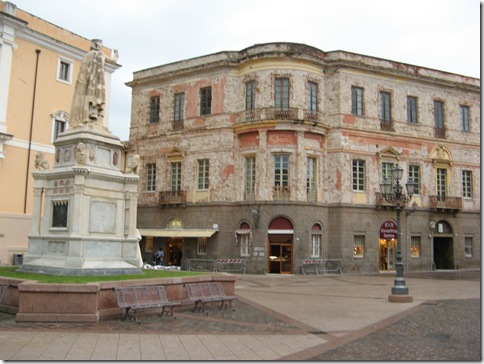 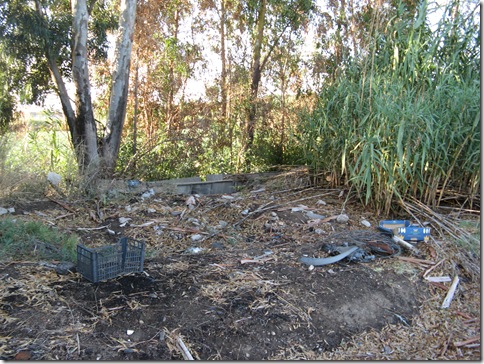 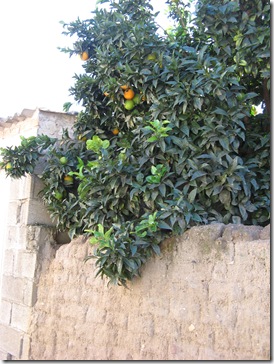 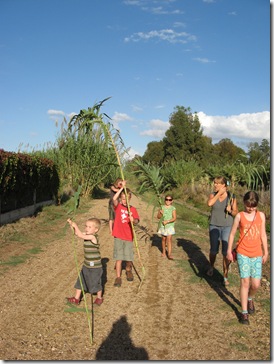 late afternoon haystacks – made me think of Monet 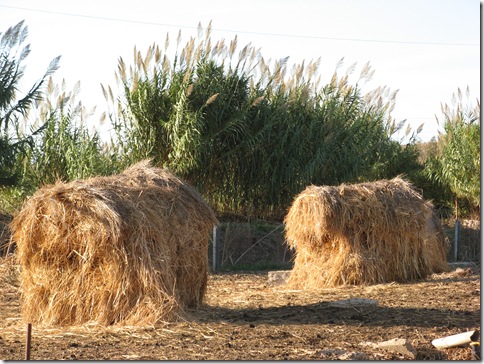 me and my tribe – tomorrow we head back ‘home’ in addition to beaching and visiting, we’ve almost finished reading Percy Jackson aloud and the kids have played several games of Monopoly – the Italian version – so when Diego wasn’t playing, I had to give them my best guess of what the Imprevisiti (Chance) card was saying: Andante in prigione direttamente e senza passare dal <<Via!>> — Go directly to prison without passing Go. 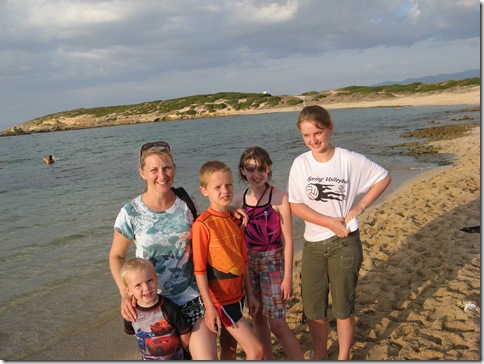 And now it’s time to go and the Sardinian bird says Arrivederci! 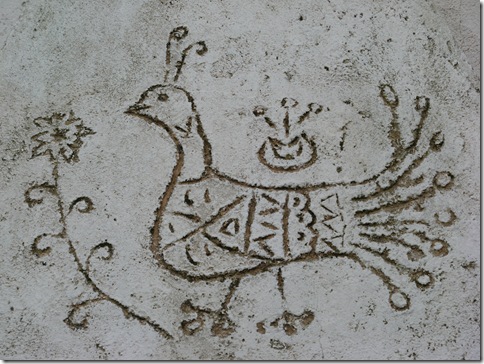 3 thoughts on “A little more Sardinia”