This week I bought my first ever cherry pitter. Here’s why. 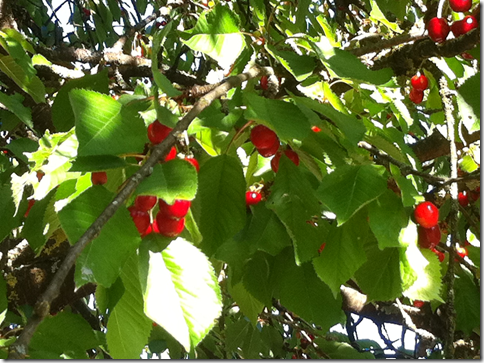 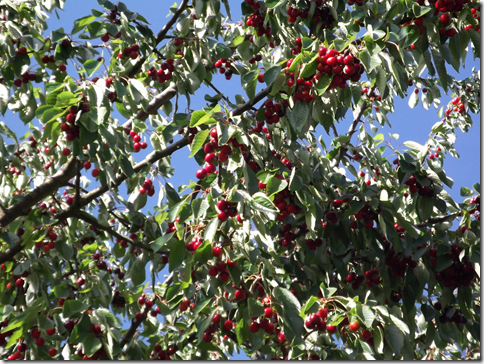 There is this whole tree full, of which the southern half is already ripe. This picture below shows only about a third of the tree. It’s full sized, about 40 feet high. There’s no way we could reach the upper branches without breaking some necks, but I am quite sure there will be enough bounty on the lower branches for us. Especially since there are four more cherry trees in the orchard that will ripen after this one! Goodness! Anyone wanna come cherry pickin’?
I’ll just have to keep telling myself that it’s good to leave lots for the birdies – I’m sure that’s how many folks have injured themselves….if I could juuust reach that juicy bunch over there….
Here is part of the tree with Artemis “doing her math” on the bench and Hermes up the ladder scouting out the goodness. 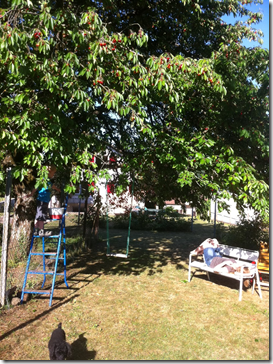 Here is what you do with cherries after you pick them off the tree:  Cherry earrings! 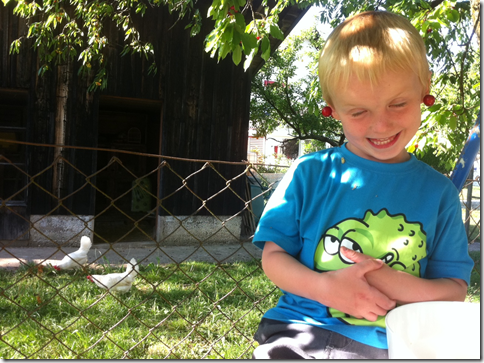 We didn’t have a cherry tree growing up and since my parents weren’t huge fans, we didn’t come across them very often. Cherries became the stuff of children’s literature where children dangle cherries on their ears.
Later on, I realized I really liked cherries. The real ones are even better than cherry flavored lollipops! 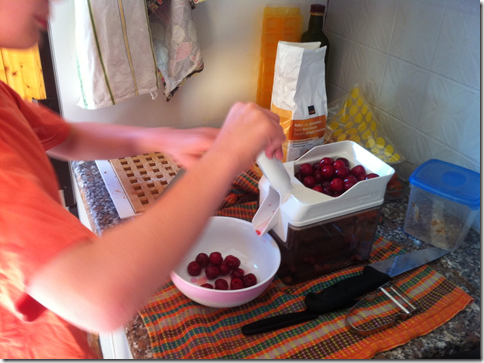 Here is the cherry pitter in action. It’s a Leifheit and you fill the cherries into the hopper on top, press the handle, hear a satisfying cher-CHUNK as the little blade pushes the pit into the box underneath, and the pitted cherry drops out into the waiting bowl. You can get through a lot of cherries fast!

With those particular cherries (after eating a whole bunch and making cherry clafoutis) we made jam. Yum! Sunday afternoon we all went out and picked 10 pounds in about 45 minutes (I weighed them because I wanted to know.) Those have been frozen for winter clafoutis, eaten in a tart and dried to go in homemade granola.
Something I love about eating in season is that when a particular fruit is ripe, you eat and eat it until you are nearly sick of it when the season end. Then it is a treat to look forward to next year. For now we are in the eating and eating stage and not yet to the tired-of-them stage. 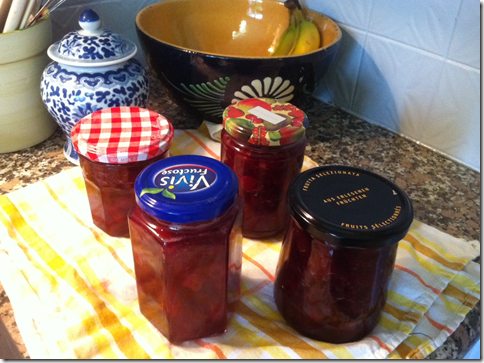 Here is my recipe for Cherry Clafoutis, which I got from Zeus’ mama. It’s a good one to keep handy because it is about as easy and Makin’ It Work as you can get. However, if you like your measurements to be super exact, then you should maybe look away. If you don’t and you like super forgiving recipes, then this one is for you!
You can call it dessert if you want, but we often have it for a small dinner, with a bit of cheese or sausage beforehand to make it nutritionally and socially acceptable. You can whip it up reeeeaally fast which makes it excellent for times when you’ve been doing a craft or being chatty on the phone and then realize that dinner time is bearing down on you like an express freight train. If the table is set and there’s a pretty clafoutis on it, then maybe your husband and kids won’t notice the pile of crafty creativeness all over the table in the next room.
Cherry Clafoutis (Claw-foo-TEE)
Oven to 350 degrees. Or maybe 375 if you feel so inclined. Butter a 9×13” Pyrex pan or if you live in a metric country grab the metric equivalent – something large and rectangular.
Cover the bottom with your pitted cherries. (Or apricots or plum halves – sunny side up.)
Sprinkle the fruit with some sugar.
In a large liquid measuring cup, measure roughly 1 cup of milk. Add three eggs, a touch of vanilla and a tablespoon of flour. Take a fork and mix, mix, mix. If you are feeling fancy, you could use a whisk – but odds are you are in a hurry, so why bother?
Pour your egg mixture over the fruit and put it in the oven to bake. For, oh… maybe 30-40 minutes? Until the custardy bit has set and it’s not jiggly in the center. The kind of fruit you use and whether or not it’s frozen will vary the time. Using frozen cherries that you have diligently stored during cherry season may mean baking it up to an hour.
When it’s done and getting just a little brown on the sides, pull it out and sprinkle a little more sugar on the top. It will sort of melt in. Or, if you want to make it all pretties, wait until your clafoutis has cooled and sprinkle powdered sugar. We eat ours only slightly warmish or at room temperature. Ta-da! All done! The next time I make one, I’ll have to take a photo to post. Bon Appetit!