It’s time to tell you that we are extending our Year of Living Swissly. There are various reasons involved, the primary one being that Zeus, who we fully expected to be milking cows all year to pay the rent, has got a job that is very interesting and resume-worthy and with which he has not yet finished. So we’ve officially decided to stay another year. There are lots of mixed feelings all around and lots of discussions on how to do schooling next year, but the most important thing to consider was this: If we’re gonna stay, it’s high time we got some LIVESTOCK! Because, really, when you are homesick and missing all your friends, nothing says "comfort" quite like a bunny. In fact, I am starting to think that all adolescent girls should routinely be issued one when they turn twelve. 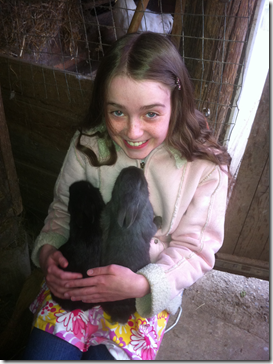 When I called the number in the classified ad to ask about bunnies the lady told me that if my daughter was interested, she had better come along to make sure there was “good bunny vibe” (or something like that) because she had lots of colors and lengths of hair to choose from. There was a sweet gray one in the first hutch she opened and so she found a bucket for Athena to sit on and put the bunny in her lap. Little Gray Bunny sort of stood up and leaned on Athena’s chest and then just gazed at her for, no joke, about 15 minutes. When the farmer lady came back she asked, “Well, have you chosen?” “Um…I think the bunny has chosen us.” Even the farmer lady was amazed! She was very happy that her bunny was going home to live with a girl she adored so much. So that she would not be lonely, we got her sister too, who wears a little black jacket. 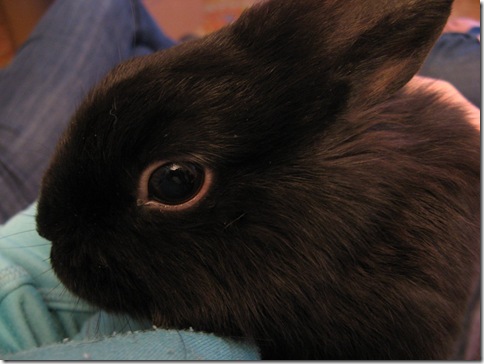 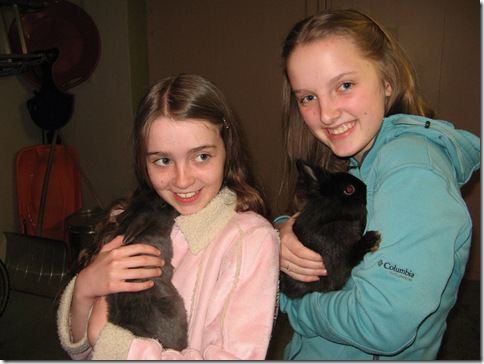 Little Bunnies are awaiting names. The kitchen whiteboard is full of ideas ranging from Jane Austen heroines to Darth Fluffy and Master Fuzzy, a la Star Wars. There’s a rumor that we’ve finally reached a settlement with Flopsy and Mopsy.  Meanwhile they’ve settled into their lovely ready-to-go hutch out in the garden shed. It is all set up here beautifully because …{shhh….cover those long bunny ears} around here, rabbits are often raised for their meat. A few people have already asked me if I was raising them for “elevage”? to eat?  “NO! For snuggles!” 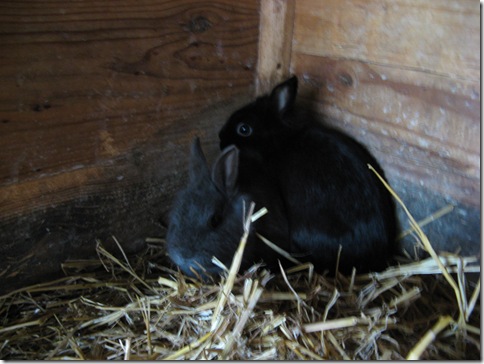 4 thoughts on “Comfort Me with Bunnies”