Here is a sign that we see at the entrance to a French village on the way to church. It says, Be careful of Children with Really Bad Hair. 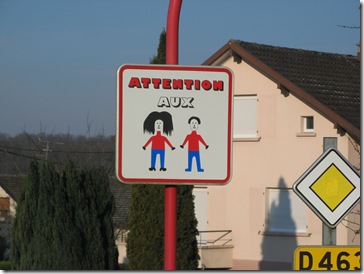 Happy February to you! I am not quite sure how we ended up here, but I have a hunch several of us may have been sick in bed when it happened. This year has been an exceptionally hard one for us, healthwise. I think it’s a combination of the new Continental germs and the fact that with the kids in school this year, they have to go collect new germs every day and bring them home. Better general health was one side benefit of homeschooling that I surely do miss. This week we are capping off three weeks of intense flu with a dose of croup for Hermes and a new cold virus for him and for me as well. We wash hands, we wash pillowcases, we drink tea and Airborne and we still get sick. Sometimes it is nice to be forced to stay home and watch movies, but it does make it hard to grocery shop (especially when the stores close at 6:30.) Ah, well. We have done a couple other things. One is to start making bread using spelt flour, or epeautre as it is called in French, or even better, Dinkel, as it is called in German. If you get whole wheat spelt it is called Dunkel Dinkel which is very fun to say. If you get the light kind of spelt flour, the German words are Dinkel Hell. Yikes!  Ah, fun with words. Now that the 3 olders are learning some German along with their French, they get to laugh at the same funny little things that I’ve snickered at for years, and there are moments when that makes all the fuss of this year worth it – just to say “Dinkel hell! Dinkel hell!” So we made a tresse out of Dinkel hell. Tresse is a light fluffy braided egg braid – Challah, that is very typically eaten here on the weekend. It has been a long time since I’ve eaten any, and was it ever a treat to make and eat one now. Spelt does contain some gluten and I was worried that Athena and I might suffer some ill effects, although we’d been dabbling in spelt for a few weeks. But honestly, when I first bit into that bread, I didn’t even care. Thankfully – no ill effects at all! Just sadness that the bread went so quickly. Hermes was enraptured with the bread process and he and Athena pinched off some dough and fashioned a turtle with cloves for eyes. 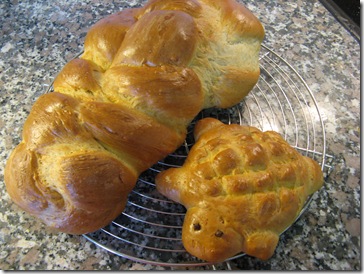 Here is Athena, thinking she is in a happy bread dream. 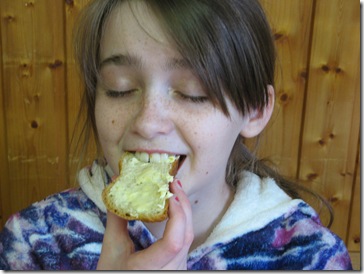 In school the kids all seem to have passed some sort of invisible road block. Even if they won’t admit it, something is clicking for all of them. I hear French coming out of their mouths, talking with their grandparents, with neighbor kids, on the telephone. They don’t seem quite as emotionally exhausted at the end of the day, and there is a little bit of energy left to think about other things. There are still tears and frustration about the logistics of the thing, but it is easier to sort out now which is due to the language and which to the aggravation of school in general. They finished the first semester a couple weeks ago. We have continually told them that this year is NOT about getting good grades. Nevertheless, it is been gratifying to each of them that he or she has had some good tests and has proof for the teacher and the rest of the class that they are not genuine nincompoops (just posing for a little while). Zeus’ job goes well, and he returned at the end of last week from a trip to the Boston. This turned out to be very timely as he was able to escape the General Sickness and has so far alone escaped unscathed (despite my flu shot – hmmm…)  He packed an extra duffle bag in his suitcase and made a purposeful visit to Costco. He called me from there to ask about something on my list, and he had a dreamy sound in his voice, said he was just slowly walking up and down every aisle. The difference in the price of two bottles of contact solution he bought me there ($16) and two pack here ($65) more than covered the price of the taxi cab to get there. We have settled on a church – the Action Biblique de Montbeliard — about a fifteen minutes away in France. It’s a very vibrant, crowded, sound, loving, praying body of evangelical believers. In short – everything that we have always heard doesn’t exist in France! Ha! God is up to Things. Aslan is on the move. I love that the music is great, that the preaching is excellent and edifying and that the worshippers come in all colors and all ages. We’ve also attended a home group – a cellule – on Thursday evenings in one of the nearby villages. We just have to watch out for the Kids with Really Bad Hair.