So Sunday afternoon just after I’d taken those pictures in the previous post of a mellow Sunday afternoon reading under the trees, tra la la, I got up to take dishes back to the kitchen and out of nowhere a wasp stung me on the arm (in the triceps, for those who’d like to know.) Nasty thing! It hurt like heck, of course, but I was brave and took the dishes in anyway on my way to the medicine cabinet. I slathered it in tea tree oil and stuck on a band-aid (Snoopy!) and didn’t think much more about it. The next day my arm didn’t hurt much but I had weird muscle pain in my back between my shoulder blades. Then it moved to my chest. As the day progressed, I started feeling really out of it and a little dizzy. I began wondering if the pain was caused by the wasp venom. I took a bath to soak it out (?) and headed for bed. I think maybe Zeus thought I was crabby, but I was just super tired and couldn’t think very clearly. This morning the pain had moved down to my left hand and was making it all tingly. I was also much dizzier and faint and blurry thoughted, and I started thinking that this was really weird. I’ve been stung before without any reaction like this. So I did a search on the internet (!). I found an informative site that had helpful news links in the side bar: Camper Dies after Bee Stung! Grandma Killed by Wasp Sting on Hand! The site information explained the different grades of reactions to stings: a local reaction at the sting site: bothersome but not too worrisome, and systemic reaction where badness (to use the medical term) travels somewhere else in your body and causes reactions there. A severe systemic reaction is what we know as anaphylactic shock. The symptoms listed were these: hives, faintness, dizziness, tingly of extremities, wheezing, difficulty swallowing, tingly feeling of lips and mouth, confused thinking. Yikes! Now I know that anaphylactic shock is something that occurs within minutes if not seconds of a sting. It sounded like I was having shock reeeeaaaaally slooooooowly. I know I can be kinda slow sometimes, but c’mon! Still, it was worrisome: my extremity was tingling and I kept feeling like I was going to black out. Wasn’t my tongue feeling kind of tingly too? And my lips? Or was that because I was just squeezing them together? Was that swallow as easy as the last one? Aaaa! Finally I called the village doctor and made an appointment. Sigh. On Thursday night Zeus and I had gone over the budget. We have some nice pricey health insurance (mandatory in Switzerland), and to save a little money we opted for higher deductibles and prayer. We decided we just wouldn’t go to the doctor this year – we’d avoid him altogether! – maybe not so realistic with four kids. But we’d be super healthy after all, right? from all those fresh mountain herbs and cheese? Sigh. I was the first one to go and in the end, it’s a good thing. I wasn’t being a hypochondriac after all. The doctor said my symptoms were kind of classic for a delayed reaction or serum sickness. He gave me an oral cortisone to take for three days along with my anti-histamine, and told me that next time my chances are about 50% of having a similar or greater reaction, and I should start carrying the cortisone around with me. He gave me a cute little keychain box to keep them in. 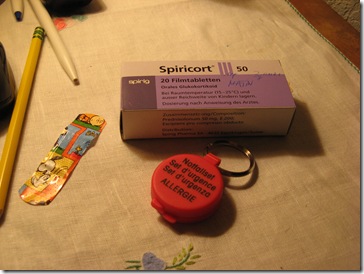 So, relieved, I swallowed the meds and went home for a nap, which is what I had wanted to do all day, but had been a little afraid to as there was no one home but Hermes to poke me if I just slipped off and away into unconsciousness. Now with the kids home from school and some cortisone in the system, I let them fend for themselves and did a major flop. After the flop, my brain started thinking a little more clearly and I felt a little better. Still dizzy and tired, but better. I went to bed early again. But now I am suspecting that whatever cortisone does it must also stimulate ADRENALINE because it’s 4:42 am and I’ve been AWAKE for three hours!! And feeling wordy and chatty!! The doctor did say that generally, it should be taken in the morning. Hmmm… So I feel like I lost two days in there. I was going to paint a wall in the kitchen today (our landlady said I could!), but it was a no go. Rats! It will have to wait.