er….I mean football? Making new acquaintances has been difficult for the children. Not by any means discounting the inclusive group of girls in Athena’s class, our kids are now in that peculiar stage in between making new acquaintances and making friends. Now matter how inclusive they are, you are still the new kid amongst a small group that has been together for from five to nine years and you don’t really always understand what they are saying. We try to do our part, like giving Artemis and three classmates a ride back from the pool this morning so they wouldn’t have to walk in the rain. Or buying an inordinate number of overpriced chocolates from Athena and her classmates for the Swiss Historic Foundation. I even kept a lid on it and did not share my personal thoughts on making captive public schoolchildren do your fundraising  dirty work. Just smiled and opened the wallet.  But still, it’s tough and awkward when you can’t express yourself. When you are trapped behind words that won’t appear on your tongue. Or maybe they do appear and you are brave and try them out and still no one understands what you are trying to say. Or worse they make fun of what you say. I am grateful at least that I know what it feels like and can commiserate. Who is having the hardest time depends on the day, but at the beginning Apollo was definitely in a funk. He is at an age where the concept of being from somewhere else and speaking a different language and yet still being a person worth knowing has yet to enter the group consciousness. (Artemis has a different story: the girls with who she rides the train think it is just so exciting that she is from Seattle, where Microsoft is, where Bella from Twilight went shopping!! ooo la la!! But, they wonder, do we like living in a house here? Don’t all Americans live in apartment buildings?) I got the impression that the other kids in Apollo’s class just didn’t know what to do with him, and he, feeling awkward, responded somewhat sullenly to the overtures which were made, which led to more awkwardness and frustration. Arg! And this was before one of the kids started calling him Teacher’s Pet every time her back was turned (new vocabulary: “chou chou” – now you know.) Apollo is also a boy, and boys need to do stuff. Girls, if they have the right vocabulary, can make friends talking over the various merits of different kinds of candy wrappers, but boys need an activity upon which to base their relationship. So good heavens, praises be for soccer…or rather, football, or better yet le football. The first week when Apollo was feeling very low, Zeus took the boys to the playground, and then who should they see arriving for practice but the soccer team! Zeus had just that day been trying to find out information about it, so he ran over and talked to the coach who was very accommodating. It was only their second practice of the year and most of the team hadn’t made it to the first. So my boys zipped home (about 2 minutes away), changed into soccer duds and cleats (brought from the USA for such a time as this), and zipped back for Apollo’s first practice. Here it is – he is in green on the right. This picture also tells another story. I keep telling you how close we are to the French border. Here you can see: the soccer field is in Switzerland, the corn field is in Switzerland, and the houses are in France.

After that practice one of the other boys kept saying, within in our hearing, and about Apollo, “Il est fort, eh? Il est fort!” He’s really good, huh?! He’s really good!  I don’t know whether or not he really was, but I so appreciated this boy’s saying so. Made me want to kiss him on the nose. (but I didn’t) The following Saturday was the team’s first game. It was very hot and Apollo was exhausted from a week of school in French, but he did alright. Hurray for soccer where it doesn’t matter if you don’t say a lot – just have to work to get the ball into the net. 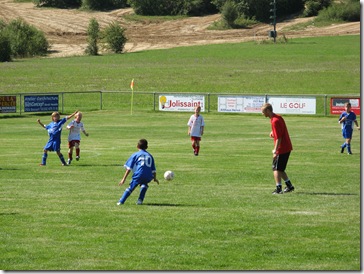 After that game the coach remembered that Apollo really is not allowed to play an an official game without his “soccer license.” No joke, we had to get a passport sized photo of him and send in a form to some high authority, and now we are awaiting his “license.” Wouldn’t want to kick that ball without a license now, would we?! 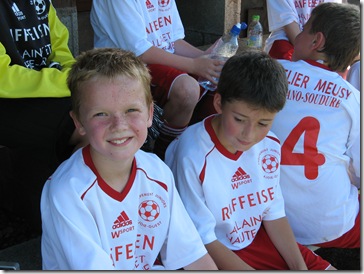 The practices are long – two hours on Wednesday afternoon, but only once a week, except for this week when there are two. I don’t know why. However, the practice field is about a 7 minute walk – an under 5 minute scooter ride. So Apollo can scoot himself over there on his own. He scoots home more slowly two hours later, exhausted and famished, stumbling into the kitchen and immediately inhaling anything in sight that’s edible. But it’s worth it; he is a part of something and he belongs to a team.

5 thoughts on “Do you speak soccer?”