Here at last is a post about our sweet sweet nephew Adrien. He is now eight months old and a couple of weeks ago was his baptism. His parents saved the ceremony for our arrival, and that fact alone made it very special. 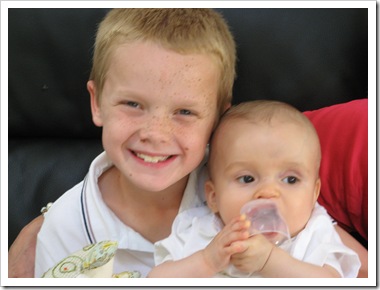 Apollo with Adrien who is chewing on the top to his bottle. He is teething these days, but is such a good natured chap that he doesn’t complain much. Just chews on everything. Adrien’s parents asked Zeus to be his godfather. He is very honored at his role in his nephew’s life and got to pray over him at the ceremony. 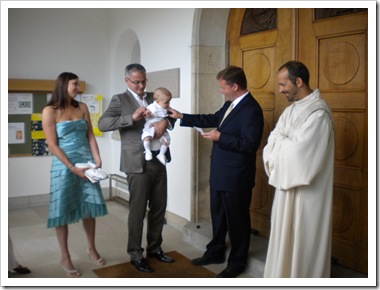 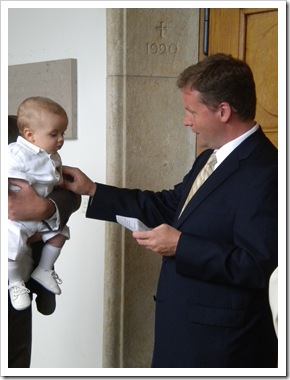 Even before the water was introduced, Adrien grew fussy and agitated at all those people staring at him. Then we added water… 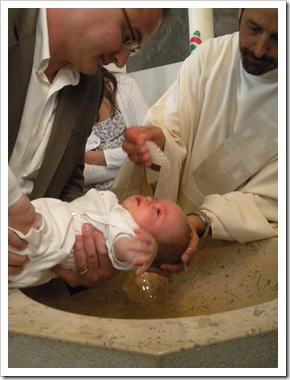 …and the result echoed nicely off the old church walls. 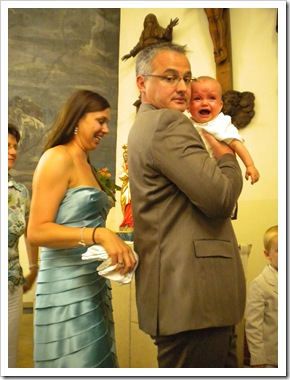 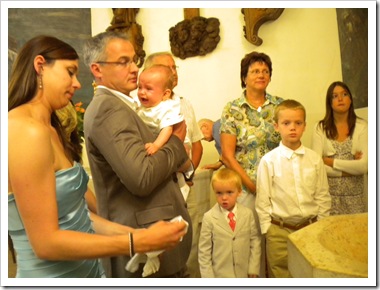 Such a crying fit is quite unusual for him; he is normally such a happy baby. His parents had asked to sing a song, which I did just after the water bit, and I am pleased to say that it soothed and calmed him right down again. 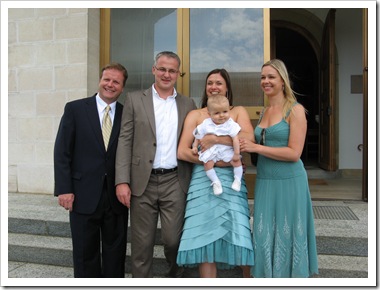 Here are the parents and godparents on the church steps just after the event. Adrien is looking quite pleased with himself, all of the fussies forgotten. 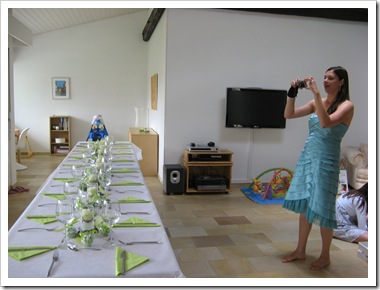 Afterwards we were invited to Adrien’s house for a lovely meal. Brothers together. My boys can never get over the fact that while Papa is older than Tonton, Tonton is quite a bit taller. It’s perplexing when you are small, but it gives Hermes hope. Hermes, by the way, LOVES Adrien. When we were planning this trip he would talk about him and all the things he would do with our new cousin. He would explain that while he was not the boss of everyone (as he must rather often be reminded) and that Mama is the boss, and Papa is the big boss, and that when she is the babysitter, Artemis is the boss and the others are also sometimes the bosses, he, Hermes, is the boss of Adrien. We let it slide. His happiest face since we got here has to be when holding Adrien for the first time. Yesterday after church, we swung by for a few minutes to say hello to Adrien and his parents, and it felt so normal and informal and casual. He was finishing up his vegetable puree and we ooed and awed over it like a bunch of monkeys. He looked at us, quite taken aback. I told him, “yeah, we’re kinda weird, but too bad, you can’t choose your relatives.” So yeah, this is a big part of why we came – to do life with family, to hold our new cousin, to celebrate special times together and ordinary times too. 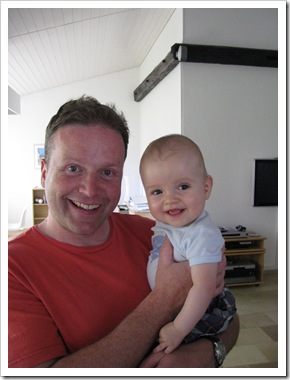 2 thoughts on “This is why we came”